Tavira is a beautifully elegant town, situated in the East Algarve, in the distance of about 7 km from Cabanas and only 20 km drive from the Spanish border.

It is a charming small town, with white houses, numerous churches and a whole lot of architectural details. It is regarded as prettiest, and in addition it is enough virgin small town in the region Algarve. There’s a small, active fishing port and a modern market.

The old roman bridge Ponte Romana over the river Gilão connects two charming parts of the town. In particular charming is area around the Praça da República and then typical rows of Portuguese ‘town’ houses with tiled fronts along narrow cobbled streets.

The market hall on the river front was re-vamped a few years ago and now is „home” to several shops, cafes and restaurants around the edge with the central space available for exhibitions and special events. In Tavira, of course, there is also plenty of restaurants and cafes for refreshments.

Tavira has a romantic feel, nestling there right on the waterfront. The blissful peacehas influence on everyone after a few minutes of the stay in this small town. The Roman bridge, Ponte Romana, spans the river with low arches and creates gentle reflections on the water.  At low tide there are normally people wading in the river – presumably after clams.

This stretch of river front along the Gilão River is a great place to sit at one of the cafes and enjoy the very picturesque setting. The gardens near the bridge offer a pleasant shady place to sit. Tavira is a perfect holiday spot for couples and families and there are also lots of great places to visit if you want to venture a little further afield.

The 16th century Igreja da Misericórdia is often cited as one of the finest churches in Tavira, with its blue and white azulejos, magnificent carvings and scenes from the life of Christ. Next church, the 13th century Igreja de Santa Maria is famed for holding the tombs of the seven Christian knights who were killed by the Moors.

The Roman bridge Ponte Romana and high Mauritanian walls are reminding of history dating back to the antiquity. Rebuilt in the 13th century, after the town was recaptured from the Moors, the castel was partially destroyed in the 1755 earthquake. Today, a beautiful garden sits amid the crumbling walls. The castle gives also fantastic views across Tavira from the walls.

If you interested in the architectural heritage of the town, Tavira Municipal Council has produced a fascinating booklet about some recent archaeological discoveries in Tavira about the defensive structures of Phoenician, Islamic and Portuguese Tavira and a guide to where you can see these reminders of the past. The booklet should be available from the tourist office and is called ‘Military Architectural Heritage of Tavira’.

Plenty of historical buildings like churches, the townhall and the convent are worth a visit. ‘Câmara Oscura’ in the Torre de Tavira (the old water tower), gives you a 360ovirtual tour of Tavira. The tourist train near Ponte Romana bridge is taking tourists to the most interesting sightseeing places.

Tavira was famous for fishing, fish salting, and especially for tuna. In the 14th/15th century the port became very significant. Dried fruit, wine and salted fish were being exported all over the world. 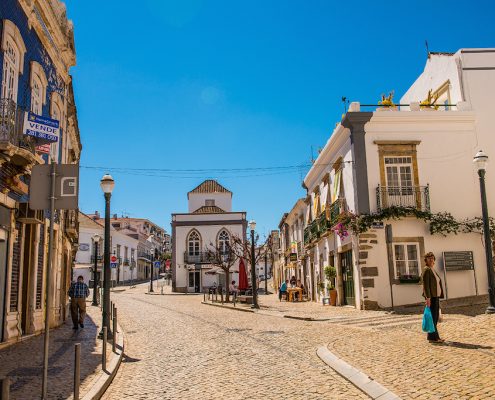